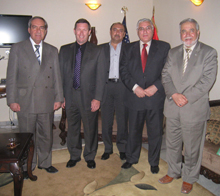 Defenshield President Collins White recently traveled to Iraq for meetings with several Iraqi ministers regarding the equipment needs of the Iraqi Army as it establishes its own public security infrastructure.

Meetings were held with Raid Fahmi Jahid – Minister of Science and Technology, Faruq Abd Al-Qadir – Minister of Telecommunications, Fawzi Hariri – Minister of Industry and Minerals, and Dr. Sami Al-Araji – Chairman of the Iraqi National Investment Commission to discuss the feasibility of establishing assembly facilities in Iraq for Defenshield product lines. Conversations will continue later this month when White returns to meet with additional security organizations and industry representatives.

In Bagdad, White stayed at a U.S. Department of Defense compound within the International Zone. While touring the area, several Defenshield Mobile Defensive Fighting Positions (MDFPs) were seen being used at Camp Victory for physical security and anti-terror operations in an area charged with monitoring all personnel and materials activity in and out of the former Bagdad International Airport. Commanders in the area also indicated that MDFPs are in widespread use in the northern territories of the country.

White expects to return to Iraq for further discussions later this month, following a series of meetings in Mexico with the U.S. Department of Commerce. There he will discuss possible partnerships with local distributors representing Defenshield products to Mexican Law Enforcement and Military agencies for use in drug interdiction programs at the state and federal levels.