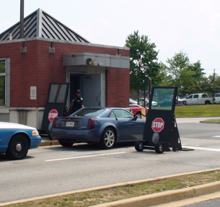 Marine Corps Air Station in Beaufort, SC has requested nearly a dozen DS-192 Mobile Defensive Fighting Positions for use at entry control points throughout the base. Units are expected to be delivered mid-December and will include several Tow Bars for moving the units with a vehicle short distances across the base. Rear swivel casters will also be fitted to allow the MDFP’s greater circular movement on improved surfaces such as tarvia or concrete.