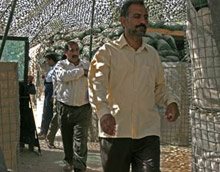 For Marines, manning one of the only entrances available for entry into Fallujah from the city’s western side can mean long hours exercising extreme focus even during times of boredom, and using a sixth sense to detect danger during an otherwise calm and peaceful Iraqi day. This entrance, called an entry control point, is placed strategically at one of the largest roads into and out of Fallujah, and is manned by leathernecks with 1st Battalion, 1st Marine Regiment, Regimental Combat Team 6.

Fallujah residents hustle and bustle through the ECP carrying groceries and carts filled with tools, clothes and produce. The people can peek through the cracks between barriers which surround them and see lanes where cars line up to be searched. Enabling almost every man, woman and child to go about their daily lives in an orderly manner, while maintaining essential security, is the primary objective of the Marines here.

Advanced electronic identification systems, and the hard work and dedication of Marines in Company A, 1st Bn., 1st Marines, have helped keep the streets of Fallujah safer since they arrived during July.

Lance Cpl. Zach S. Lively, a 20-year-old assaultman with Company A, watched through the ballistic glass window and down toward a crop-covered field that borders the road and ECP. From his post, which looms 30 feet above the Iraqi landscape, he explained that he normally stands the east and west posts and works down on the ground regulating traffic. According to the 2006 Green Mountain High School graduate, regulating traffic is preferable to standing post because he is a lot closer to the people.

“When a vehicle needs to get through the ECP, they have to be escorted by an Iraqi policeman and then you have to talk to the driver and see what’s going on,” said the Denver native. “The Marines will then call over radios to the Joint Coordination Center to see if they are cleared to enter.”

“You see a lot of the same people every day and you know them and build a relationship with them,” said Lively. “You get to know the IPs and the drivers, and learn when everything is going right and when something is up. If anything is off you know it right away.”

This is the sixth sense the Marines have developed in this simple, but demanding job. It is present even in Pvt. Jace D. Sorter, a 24-year-old assaultman and Aberdeen, Wash., native, who before midday had already checked the identification of 1,936 males above the age of 15 who had passed through the personnel center.

“All foot-mobile personnel with the general public come through this area and must present valid identification if they want to get through,” said the 2001 Aberdeen High School graduate, standing in a dug out space, which was heavily reinforced with ballistic glass and sandbags. “If they have an old ID or its invalid, then we send them down to the cave.”

The cave is the nickname, given by the Marines, to a plywood building where Iraqi citizens are issued new IDs. But that’s not all, said Lance Cpl. Russel A. Jones, who serves as the noncommissioned officer in charge of the cave.

“When someone needs to have a new ID card made, whether they had one of the old ones or just need to get one, we collect all of the individual’s information and assign it an identification number,” said the 20-year-old David City, Neb., native. “We then place all of this information on a database that is used by ECPs all over the place.”

This database holds the information of millions of people, down to even the finest details of physical characteristics. When Marines check a person’s ID electronically, like ECP 5 Marines do, they get a total readout of the person’s legal and residential history along with other information, allowing them to determine if a person should be allowed to pass, if they should be turned away, or if they should be detained.

“It’s a great system that allows us to safely control traffic flow into and out of Fallujah as well as catch the bad guys,” said the 2005 David City High School graduate. “About a week ago, we got an alert on a guy that was responsible for laying IEDs. A couple of days ago, using this system, we caught him trying to come through our ECP.”

There is a sense of accomplishment by all the Marines at ECPs. They have pride in what they do, because they know they are protecting Al Anbar, and their fellow Marines.