Falluja’s Calm Is Seen as Fragile if U.S. Leaves

Falluja’s police chief, Col. Faisal Ismail Hussein, waved aloft a picture of a severed head in a bucket as a reminder of the brutality of the fundamentalist Sunni militias that once controlled this city. But he also described an uncertain future without “my only supporters,” the United States Marine Corps.

Nearly three years after invading and seizing Falluja from insurgents, the Marines are engaged in another struggle here: trying to build up a city, and police force, that seem to get little help from the Shiite-dominated national government. 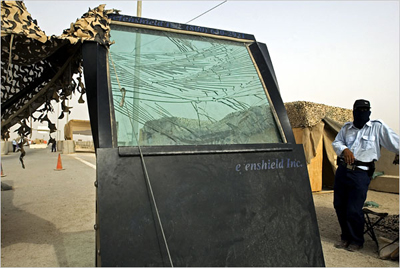 Fallujans complain that they are starved of generator fuel and medical care because of a citywide vehicle ban imposed by the mayor, a Sunni, in May. But in recent months violence has fallen sharply, a byproduct of the vehicle ban, the wider revolt by Sunni Arab tribes against militants and a new strategy by the Marines to divide Falluja into 10 tightly controlled precincts, each walled off by concrete barriers and guarded by a new armed Sunni force.

Security has improved enough that they are planning to largely withdraw from the city by next spring. But their plan hinges on the performance of the Iraqi government, which has failed to provide the Falluja police with even the most routine supplies, Marine officers say.

The gains in Falluja, neighboring Ramadi and other areas in Anbar Province, once the most violent area in Iraq and the heart of the Sunni Arab insurgency, are often cited as a success story, a possible model for the rest of Iraq. But interviews with marines and Iraqi officials in Falluja suggest that the recent relative calm here is fragile and that the same sectarian rivalries that have divided the Iraqi government could undermine security as soon as the Marines leave.

Rank-and-file marines question how security forces here would fare on their own, especially when the vehicle ban is lifted.

If Falluja were left unsupervised too soon, “there is a good chance we would lose everything we have gained,” said Sgt. Chris Turpin, an intelligence analyst with a military training team here.

Marine commanders emphasize there is no hard-and-fast date for leaving the city. “A lot of people say that without the Americans it’s all going to collapse,” said Col. Richard Simcock, the commander of Marine Regimental Combat Team Six in eastern Anbar. “I’m not that negative. I’ve seen too much success here to believe that.”

Most of the fuel, ammunition and vehicle maintenance for the Falluja police is still supplied by the American military, said Maj. Todd Sermarini, the marine in charge of police training here.

Some police officers have been forced to buy gasoline from black-market roadside vendors. “Ammunition is a big problem, weapons are a problem, and wages are a problem,” said Capt. Al Cheng, 34, a company commander working with the police here.

Many Sunni leaders here contend that the Shiite-dominated government is neglecting them for sectarian reasons, and the bad feelings at times boil over into angry accusations. In interviews conducted in early August, some said that factions in the Interior Ministry were taking orders from Iran, or that the government was withholding money and support because it did not want to build up Sunni security forces that it could end up fighting after an eventual American withdrawal from Iraq.

Iraqi officials in Baghdad deny shortchanging Falluja, saying they have authorized more than enough police forces for Anbar. “We’d like to support them, but that does not mean we can respond to their requests or demands,” said Sadiq al-Rikabi, political adviser to Prime Minister Nuri Kamal al-Maliki. He said the government had problems supplying the police throughout Iraq.

The Marines operate as a “shock absorber” between the locals and the central government, said Brig. Gen. John Allen, the deputy Marine commander in Anbar Province. The animosity toward Baghdad among the Sunnis here “worries me, but I don’t despair of it,” he said, adding that he thought the government’s lack of support was more a result of bureaucratic inefficiency than sectarian hostility. “The challenge for us is to connect the province to the central government.”

But first, marines in Falluja have to connect residents with their own police force. On a recent weekend, that involved establishing a joint American-Iraqi security outpost in Andalus, one of the city’s worst neighborhoods, where the pockmarked buildings still bear the scars of the 2004 American assault.

In just 24 hours, marines cut enough electrical cable and plywood to turn a shell of a building into a functioning outpost, one of the 10 they are building, one for each precinct, and to wall off the precinct behind concrete barriers, leaving only a few ways in or out.

The next step was to recruit an auxiliary force to help the police. After careful screening, they hired 200 Iraqis to serve in a neighborhood watch for the precinct, part of an effort to bolster the undersized force of slightly more than 1,000 police officers for the city and surrounding area. The members of the new force are paid $50 a month by the Marines to stand guard — mostly at checkpoints at the entrances to the neighborhood — with weapons they bring from home, typically AK-47s.

Seven of the city’s 10 precincts have now gotten the same treatment as Andalus. The idea behind the outposts was to roust the Iraqi police from their central headquarters, which they seldom left, and get them into the neighborhood outposts.

The new plan makes it easier for marines to act as mentors for the policemen, whose heavy-handed tactics remain a concern. The police need to learn not to arrest “a hundred people” for a single crime, Colonel Simcock said. “What’s going to stop Al Qaeda is not having 99 people angry at the police because they were wrongfully arrested,” he said.

Despite the marines’ best efforts to screen recruits, Captain Cheng said, “it wouldn’t surprise me that a lot of the guys we used to fight are in the neighborhood watch.” But he says the new force has already made a difference, turning in active insurgents and guarding precincts that have only 10 or 20 police officers on patrol at any one time.

Captain Cheng says the plan to turn Falluja’s security over to the police is on track, but he points out how much the marines still do. “We are the ones emplacing the barriers, we are the ones hiring the neighborhood watch,” he said. “We are the ones establishing the conditions for them to succeed.”

Violence has dropped sharply in the city, where no marines have been killed or wounded since mid-May. But deadly skirmishes have been common around the nearby village of Karma and in remote areas north of Falluja.

Twenty-five service members have been killed in Anbar Province since the beginning of July, according to Icasualties.org, making it by far the deadliest province after Baghdad.

The struggle to supply the police overshadows another important element in the American military’s gains in Anbar: contracts awarded to Sunni tribal allies in rural areas.

The tribes have relatively little influence in Falluja but dominate elsewhere in the province. Their decision to ally with the Marines helped stabilize the entire region, and men from tribes now serve in provincial security forces to help keep insurgents at bay.

One Marine civil affairs officer estimates that a quarter of the $10 million his unit has committed to spending around Falluja since March has gone to the Abu Issa tribe, which is centered west of Falluja. The Jumaili, a tribe near Karma, has received $1 million, the officer said. The contracts are typically for water treatment plants, refurbishing clinics and similar projects.

“The politics here are very much governed by greed, and this is the real alliance in Anbar,” said an American reconstruction official here who worries the contracts are only a temporary glue with the tribes and who was not authorized to speak publicly. If the Iraqi government provided more, “everything would be much more sustainable.”

The last security outpost is set to be finished in September, followed by four new police stations scattered throughout the city. If all goes as planned, the marines should begin leaving the city early next year, said Lt. Col. Bill Mullen, who commands the Second Battalion, Sixth Marines, the unit that patrols Falluja.

In effect, the Marines are predicting they can leave Falluja on the same timeline many in Congress want to see troops pulled back to larger bases or leaving altogether. Troops who would have patrolled Falluja would deploy into outlying areas by April, but close enough to reinforce the city in a crisis, Colonel Mullen said. Small police training and liaison teams would also remain.

“Everything we are doing is oriented toward our ability to leave,” he said, adding that the most likely obstacle to leaving by April would be the continued failure of the Interior Ministry to supply the police. “You can’t help hearing stuff going on back in the United States, and Congress reaching for the chain to pull the plug out of the bathtub. The smart money says there is finite time.”

The Iraqi Army has already been pulling out of Falluja. The last battalion is scheduled to leave in September. Though the marines here say the Iraqi soldiers were a good unit, there has been tension between the police and the soldiers, who one marine commander said were 90 percent Shiite. Marines say guns-drawn confrontations have occurred, though none recently.

The tensions briefly boiled over on a recent joint patrol through Andalus, when the police accused Iraqi soldiers of stealing blankets from large bags of supplies being handed to residents from the back of trucks.

As people from the neighborhood looked on, the soldiers accused the police of being “moles” and “spies” for insurgents, and the Iraqi Army commander shouted and shook his finger in the faces of policemen. The police shouted back, accusing the soldiers of serving as Iranian agents. Afterward, the police and army commanders calmed down their troops and shook hands.

If the Iraqi government provided a large and steady supply of men, weapons, vehicles and equipment, the police could secure the city, said Colonel Hussein, the Falluja police chief. But he complained of little support from the government except for salaries, which he doubted would be paid if the Americans were not here. He said he also needed four times more policemen. “Without the role of the Marines, I’ll fail,” he said.

Brig. Gen. Abdul Karim Khalaf, a senior Interior Ministry spokesman, called Colonel Hussein’s comments “unprofessional.” In an interview, he said if the Falluja police had an equipment shortage then they failed to request enough gear earlier.

He added that if Colonel Hussein is so fond of the Marines, perhaps he should apply for American citizenship.